The youth basic income in Gyeonggi Province involves paying out KRW 1 million in the form of regional currency
4 times in a year individually to youths (age of 24) who has been residing in Gyeonggi Province for at least three consecutive years. Those eligible to receiving payment in a year are approximately 175,000 people, making this
policy the second biggest in the world after the State of Alaska in USA in terms of scale. It is a case that is gaining international attention not only because of its scale but also because it is not an experiment and is an actual
policy in implementation.

In July this year, Gyeonggi Research Institute has conducted a satisfaction survey on youths who have received the youth basic income after KRW 250,000 has been paid out for the 1st quarter. From July 17th to July 22nd, web survey was conducted through Micromill Embrain Co., Ltd., an institute specializing in survey on 3,500 people out of the actual 124,335 applicants in the 1st quarter out of those eligible to payment of youth basic income.

According to the survey result, in case of youth aged 24 who are receiving the youth basic income in Gyeonggi Province, the general level of satisfaction regarding this project was 77.10 points of 100 points (80.6% satisfied, 14.5% average, 4.9% dissatisfied). This is an extremely optimistic sign in considering the fact that this policy has just commenced. In particular, the first reason they were satisfied is because the payment was made to all youths aged 24.

This signifies that it satisfies the universality of basic income in that the so-called basic income is acknowledged to be outstanding compared to other selective welfare policies. On top of that, the second reason that has been
raised is that as a basic income policy that retains the unique characteristics of Gyeonggi Province, the basic income is paid out in regional currency which can be used like cash. It is an inspiring result from the point that the
basic income is attaining positive response as a welfare policy but even as a regional economic policy. 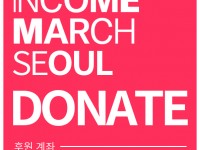